This page lists the definitions of the major global stratigraphical divisions of the Quaternary System/Period.

The current IUGS-ratified (2018) timescale for the Quaternary System/Period (July 2018).  The Middle and Upper Pleistocene subseries & subepochs and their corresponding stages & ages have not yet been formally defined, although work is in progress to do so.  Abbreviations: “b2k” = before the year 2000. ka = thousands years before present. Ma = millions of years before present. 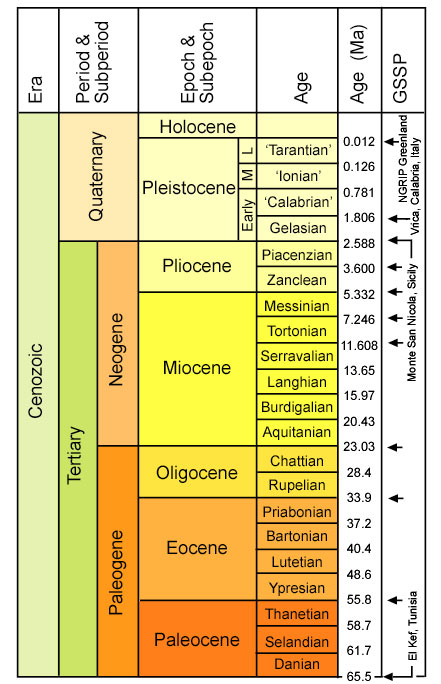 An earlier IUGS-sanctioned (2009) timescale for the Cenozoic Erathem/Era, in which the Quaternary and Pleistocene are coterminous with the base of the Gelasian Stage at 2.6 Ma. Stage names and boundary ages are from the ICS website (January 2008), with the Calabrian and ‘Ionian’ stages following Cita et al. (2006, 2008) and the provisional ‘Tarentian’ Stage following Cita (2008 and references therein). Currently defined GSSPs are indicated by black arrows. The stratigraphical intervals are not scaled to geological time (modified from Head et al., 2008, 2009).

The base of the Quaternary System/Period, and thus the Neogene–Quaternary boundary, is formally defined by the Monte San Nicola GSSP and is thus coincident with the bases of the Pleistocene Series/Epoch and the Gelasian Stage/Age.

The base of the Pleistocene Series/Epoch is coeval with the base of the Gelasian Stage/Age and its base is defined by the Monte San Nicola GSSP.

The base of the Middle Pleistocene Subseries/Sub-epoch is coeval with the base of the proposed ‘Ionian’ Stage/Age (cf. below) and the Brunhes/Matuyama magnetic reversal.  The base is conventionally dated at 0.78 Ma.

The base of the Late Pleistocene Subseries/Sub-epoch is coeval with that of the proposed ‘Tarentian’ Stage/Age and the Eemian Stage/Age (cf. below).

These terms were used as divisions of the Quaternary (or ‘Anthropogene‘) by Soviet geologists and in neighbouring countries influenced by Soviet practice (e.g. Serbia).  According to K.V. Nikiforova (1987, International Geology Review, p.1265) “the lower boundary of the Eopleistocene is the same time also the lower boundary of the Quaternary System, which was established in the Vrica section” (at the base of the Calabrian Stage, but is now at the base of the Gelasian Stage, cf. above).  “In the USSR the Epivillafranchian fauna corresponds to the fauna of the Taman faunal assemblage, and the boundary between the Eopleistocene and Pleistocene (the Lower and Middle Pleistocene in Western Europe is drawn above the cold peak of Shackleton and Opdyke’s stage (MIS) 22, below the Cromerian interglacial and the Bakunian regional stage (including the Tyurkyan horizon), the beginning of which coincides with that of stage (MIS) 21 in the Shackleton and Opdyke curve. Thus the mixed fauna at the end of the Upper Villafranchian and beginning of the Galerian existed, according to the radiometric datings, in the time interval from about 1.0 to about 0.75 Ma, when the Tamanian fauna existed in the Soviet Union. This was also approximately the time of the Sicilian substage of Italian authors (the last substage of the Selinuntian), the lower boundary of which can be dated about 1.0 Ma, and its upper boundary, the base of Shackleton and Opdyke’s “warm”  stage (MIS) 21, can be dated about 0.75 Ma. In the writer’s opinion, 0.74-0.75 Ma is also the age of the upper boundary of the Eopleistocene, or the Lower Pleistocene in the Western European scales”.  (NB Today this would coincide with the base of the Middle Pleistocene Subseries – as defined here – or the Brunhes/Matuyama magnetic reversal, dated at 0.78 Ma). The Middle and Upper (Late) Pleistocene is also referred to frequently as the Neopleistocene in Russian and USSR literature.

Hence, the Global Stratotype Section and Point (GSSP) at Monte San Nicola in Sicily, Italy, which served to define the base of the Gelasian Stage/Age since 1996 (Rio et al., 1998), now also defines both the base of the Pleistocene Series/Epoch and that of the Quaternary System/Period. The Gelasian GSSP has been correlated to Marine Isotope Stage (MIS 103) and is astrochronologically constrained at 2.58 Ma. The base of the Pleistocene had hitherto been defined by the GSSP at Vrica in Calabria, Italy, which is astrochronologically dated at 1.806 Ma (Lourens et al., 2005). This GSSP remains available to define the base of the Calabrian Stage formally (Cita et al., 2008; 2012).

Rio et al. (1998) stated that the Gelasian GSSP is at the base of a marly layer immediately overlying a sapropel (known as the Nicola bed) assigned to Mediterranean Precession-Related Sapropel (MPRS) 250. They noted that “The astrochronological age of sapropel MPRS 250 (mid-point), corresponding to precessional cycle 250 from the present, is 2.588 Ma (Lourens et al., 1996), which can be assumed as the age of the boundary.” (Rio et al., 1998, p. 85). Although an age of 2.588 Ma for the Gelasian GSSP (Rio et al., 1998, Lourens et al., 2005) has not since been disputed, it is not strictly correct, and without knowing the sedimentation rate of the sapropel, it is unrealistic to assign four significant figures to the age. Thus, if it is assumed that the sapropel was deposited over 7–10 ka (e.g. Capozzi et al., 2006) and its full thickness has been preserved, then the age of the GSSP rounds down to 2.58 Ma. Ultimately, of course, the boundary is defined by the position of the GSSP in the rock record, not by its age nor indeed any other criterion.

The Calabrian Stage is now formally defined by the Global Stratotype Section and Point (GSSP) at Vrica, Calabria, Italy (Cita et al. 2012). This GSSP had formerly defined the base of the Pleistocene. The Calabrian becomes the second stage of the Pleistocene Series and Quaternary System, following the Gelasian.  The GSSP occurs at the base of the marine claystone conformably overlying sapropelic bed ‘e’ within Segment B in the Vrica section. This lithological level represents the primary marker for the recognition of the boundary, and is assigned an astronomical age of 1.80 Ma on the basis of sapropel calibration. It coincides with the transition from Marine Isotope Stage 65 to 64, and the underlying sapropel bed ‘e’ is assigned to the Mediterranean Precession-Related Sapropel layer 176. Secondary markers include calcareous plankton bioevents of widely distributed taxa. The boundary falls between the highest occurrence of Discoaster brouweri (below) and the lowest common occurrence of left-coiling Neogloboquadrina pachyderma (above), and below the lowest occurrences of medium-sized Gephyrocapsa (including G. oceanica) and Globigerinoides tenellus. The top of the Olduvai Subchron is identified c. 8 m above the GSSP. Ratification of the Calabrian Stage effectively completes the Early Pleistocene Subseries.

The ‘Ionian Stage’ has yet to be formally defined. At present it is expected that it will be defined by its base coinciding with the Brunhes/Matuyama magnetic reversal horizon in marine sediments.

The ‘Tarentian Stage’ has yet to be formally defined. At present it is expected that it will be defined by its base coinciding with the base of the last (Eemian interglacial) Stage in marine sediments (N.B. this base does not coincide with the base of MIS 5e nor Termination 2 in the marine isotope stratigraphy which it post-dates by as much as 4 ka – an interval which is equivalent to almost 30% of the subsequent interglacial warm event).

The Greenland NorthGRIP (NGRIP) ice core contains a proxy climate record across the Pleistocene–Holocene boundary of unprecedented clarity and resolution. Analysis of an array of physical and chemical parameters within the ice enables the base of the Holocene, as reflected in the first signs of climatic warming at the end of the Younger Dryas/Greenland Stadial 1 cold phase, to be located with a high degree of precision. This climatic event is most clearly reflected in an abrupt shift in deuterium excess values, accompanied by more gradual changes in d18O, dust concentration, a range of chemical species, and annual layer thickness. A timescale based on multi-parameter annual layer counting provides an age of 11 700 calendar a b2 k (before AD 2000) for the base of the Holocene, with a maximum counting error of 99 a. A proposal that an archived core from this unique sequence should constitute the Global Stratotype Section and Point (GSSP) for the base of the Holocene Series/Epoch (Quaternary System/Period) has been ratified by the International Union of Geological Sciences. Five auxiliary stratotypes for the Pleistocene–Holocene boundary have also been recognised.

On June 14, 2018, the Executive Committee of the International Union of Geological Sciences (IUGS) ratified the subdivision of the Holocene Series/Epoch as follows:

The term ‘Recent‘ as an alternative to Holocene is invalid and should not be used.  Sediments accumulating or processes operating at present should be referred to as ‘modern’ or by similar synonyms.

Gibbard, P., Head, M.J.& Walker, M. and the International Subcommission on Quaternary Stratigraphy 2009 Formal ratification of the Quaternary System/Period and the Pleistocene Series/Epoch with a base at 2.588 Ma. Journal of Quaternary Science 25, 96–102.