The principal work of the Subcommission on Quaternary Stratigraphy is the formal subdivision of the Pleistocene Series/Epoch time. Initially this division was intended to formalise the Lower, Middle and Upper Subseries or Early, Middle and Late Subepoch divisions but a decision by the International Union of Geological Sciences Executive in 2009, has led to the need to initially divide the Series/Epoch into ‘standard stages’.

Two major types of subdivisions have been proposed for the Pleistocene Series. A standard subdivision at stage level has been advocated by workers based on sections in elevated shallow-marine sediments in Italy. Indeed, with the ratification, in 2009, of the Gelasian Stage as the basal stage of the Pleistocene, the International Stratigraphic Guide requires that the rest of the Pleistocene should be subdivided into one or more formal stages. At the same time, however, earth scientists concerned with terrestrial and to a lesser extent shallow-marine sequences have adopted regional subdivision schemes. The regional schemes have found favour because of the difficulties of world-wide correlation. In these schemes, larger, sub-series-(sub-epoch) scale units have been adopted. For example, in the former USSR, and particularly in European Russia, the Pleistocene is divided into the Eopleistocene, equivalent to the Early Pleistocene subseries, and the Neopleistocene, equivalent to the Middle and Late Pleistocene subseries.

A quasi-formal tripartite subdivision of the Pleistocene into Lower (Early), Middle and Upper (Late) has been in use since the 1930s. The first usage of the terms Lower, Middle and Upper Pleistocene was at the second International Quaternary Association (INQUA) Congress in Leningrad in 1932, although they may have been used in a loose way before this time. Their first use in a formal sense in English was in 1935 and was based on characteristic assemblages of vertebrate fossils in the European sequence. 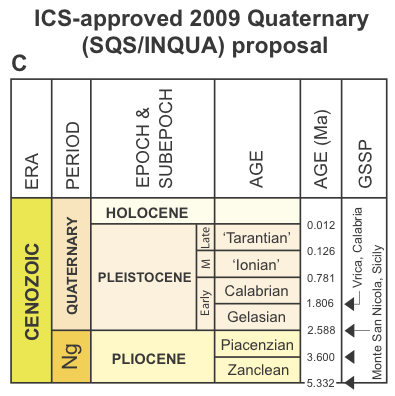 It has been recommended that “The beginning of the Middle Pleistocene should be so defined as to either coincide with or be linked to the Matuyama Reversed Epoch and the Brunhes Normal Epoch of palaeomagnetic chronology. A similar recommendation was made by the INQUA Commission on Stratigraphy/ICS Working Group on Major Subdivision of the Pleistocene, at the XIIth INQUA Congress in Ottawa in 1987, which placed the Lower–Middle boundary at the Brunhes–Matuyama magnetic reversal. However, although potential GSSP’s in Japan, Italy and New Zealand were discussed, no decision was reached. It was also advocated the Matuyama-Brunhes boundary (MBB), emphasising that it constituted the most recognisable chronostratigraphic marker in weathered continental deposits.

At present the SQS Working Group on the Lower-Middle Pleistocene Boundary is considering candidate sections in Italy and Japan, having resolved at the 32nd International Geological Congress in Florence in 2004 to place the boundary as close as possible to the MBB. The age of the MBB is estimated to be 781 ka in the astronomically tuned timescale.
Italian workers have proposed an ‘Ionian Stage’ above the Calabrian Stage in Italian marine sections. The basal boundary of the ‘Ionian Stage’ is represented in two sections, Valle di Manche in Calabria and Montalbano Jonico in the central part of the Apennine foredeep. Both sequences have been correlated using multiple parameters, including calcareous nannofossil biochronology, palynology, isotope stratigraphy and tephrostratigraphy. The Montalbano Jonico section would represent the more suitable boundary stratotype , except that attempts to obtain a magnetostratigraphy from this section have been unsuccessful (Sagnotti et al. 2010).

It is proposed that the Middle Pleistocene Subseries be comprised of a single stage – the Ionian Stage. A Working Group of the ICS Subcommission for Quaternary Stratigraphy is currently considering three candidate sections for the GSSP – the Montalbano Jonico and Valle di Manche sections in Italy and the Chiba section in Japan.

The boundary between the Middle and Upper Pleistocene has yet to be formally defined by IUGS. However, as long ago as the 2nd INQUA Congress in Leningrad in 1932, a decision was made to to define the boundary at the base of the Last Interglacial (Eemian Stage). More recently, the lower boundary of the Upper Pleistocene has been placed at the base of Marine Isotope Stage 5 (MIS 5), based on a proposal from the INQUA Commission on Stratigraphy. This proposal naturally follows from the acceptance that MIS 5, substage e, is the ocean equivalent of the terrestrial northwest European Eemian Stage interglacial.

Both the stage and the stage boundary are recognised on the basis of multidisciplinary biostratigraphy, the boundary being placed at the expansion of forest tree pollen above 50% of the total pollen assemblage, the standard practice in northwest Europe. In particular, the GSSP in the Amsterdam Terminal borehole is based on the steep rise of the Betula (tree birch) pollen curve at this point. A similar increase in the Betula curve is characterstic of many Eemian pollen diagrams across Europe and is thought to be a synchronous response to climatic amelioration, perhaps within a matter of decades as is observed at the transition from the Last Glacial to the Holocene. An age of 127.2 ka is estimated for the base of the Eemian from a varved-dated record at Monticchio, in Italy.

The terms ‘Early, ‘Middle’ or ‘Late’ Quaternary frequently appear in the literature. The term Quaternary, which has System/Period status, cannot be divided in this way, except informally. In general, it is important to avoid the use of such terms, whenever possible. If they are used, the words early, middle or late should only be used with small (i.e. lower case) letters. This is because these divisions are informal and have no status as divisions of the term Quaternary. The sub-divisions ‘Early’, ‘Middle’ or ‘Late’ apply only to the word Pleistocene (excluding the Holocene Series/Epoch). If it is desired to include the Holocene and the later Pleistocene, the recommended term is ‘late Quaternary’.