A vocal group of geologists and other scientists are pushing to define a new geological epoch, marked by climatic and environmental change caused by humans.

Alexey S. Tesakov reports that the Russian Stratigraphic Committee has finally accepted/endorsed the lowering of the Quaternary base in the Russian domestic “General Stratigraphic scheme” to the international level.

“In accordance with the adoption of the International Union of Geological Sciences (IUGS Bulletin, N.41, July, 2009) a new lower boundary of the Quaternary system in the International stratigraphic scale at the level of 2.6 (2.588) million years we accept the proposal of the Quaternary Commission of RSC to approve this boundary in the General stratigraphic scheme according to the base of the Gelasian (the section San Nicola, Sicily).”

This act was printed in the annual issue of the Committee’s acts (2012): The official decision on the lowering of the Neogene-Quaternary boundary // Acts of the Interministry Stratigraphic Committee and its permanent commissions. Issue 41. Saint-Petersburg, VSEGEI Press. pp. 9-11. 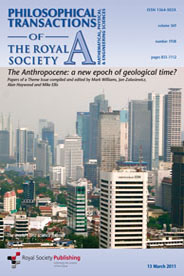 Report of the International Commission on Stratigraphy meeting in Prague, 31.5.10 – 3.6.10 by Professor Martin Head (SQS representative).