A Global boundary Stratotype Section and Point (GSSP, known colloquially as a “golden spike” from railroad history) is a single point defined in a designated geological section that serves to define the base of a unit (a boundary) within the Geological Time Scale (GTS). All official units in the GTS are defined in this way.

Following the ratification of a GSSP, it is customary for the GSSP proposal to be published in the form of an announcement (usually in the IUGS journal Episodes), and for a dedication ceremony to be held at the GSSP site The ceremony usually involves the unveiling of a GSSP plaque (often in the form of a “golden spike), accompanied by speeches from local to international dignitaries. These ceremonies help raise awareness of the geosciences in general and the important work undertaken by the International Commission and its constituent subcommissions.

For various reasons, the Chiba GSSP dedication ceremony, held on May, 21 2022, is the first such ceremony to be held for a Quaternary GSSP.  The Chiba GSSP defines the base of the Chibanian Stage and Middle Pleistocene Subseries.

On Saturday, May 21, 2022, the Mayor of Ichihara City, Chiba Prefecture, Japan, hosted a dedication ceremony for the Chiba Global boundary Stratotype Section and Point (GSSP). This GSSP defines the base of the Chibanian Stage and Middle Pleistocene Subseries. The GSSP was ratified in 2020 (Suganuma et al., 2021, 2022) but the ceremony had been postponed owing to travel restrictions imposed by the Covid-19 pandemic.

Clubhouse of the Minami Ichihara Golf Club, venue of the GSSP ceremony.

The ceremony was held at the impressive and spacious clubhouse of the PGM Minami Ichihara Golf Club, in the centre of the Boso Peninsula and a short drive from the Chiba section. It was attended by many dignitaries and representatives of Japanese scientific, cultural, and administrative agencies.  Those playing an active role in the ceremony were:

Representative for the Chief Cabinet Secretary

Representative for the Ministry of Education, Culture, Sports, Science and Technology

Pupils of the Kamo Gakuen elementary and junior high school

Message of congratulations from the President of IUGS, Prof. John Ludden

Message of congratulations from the Chair of ICS, Prof. David Harper

Installation of the GSSP plaque at the Chiba section 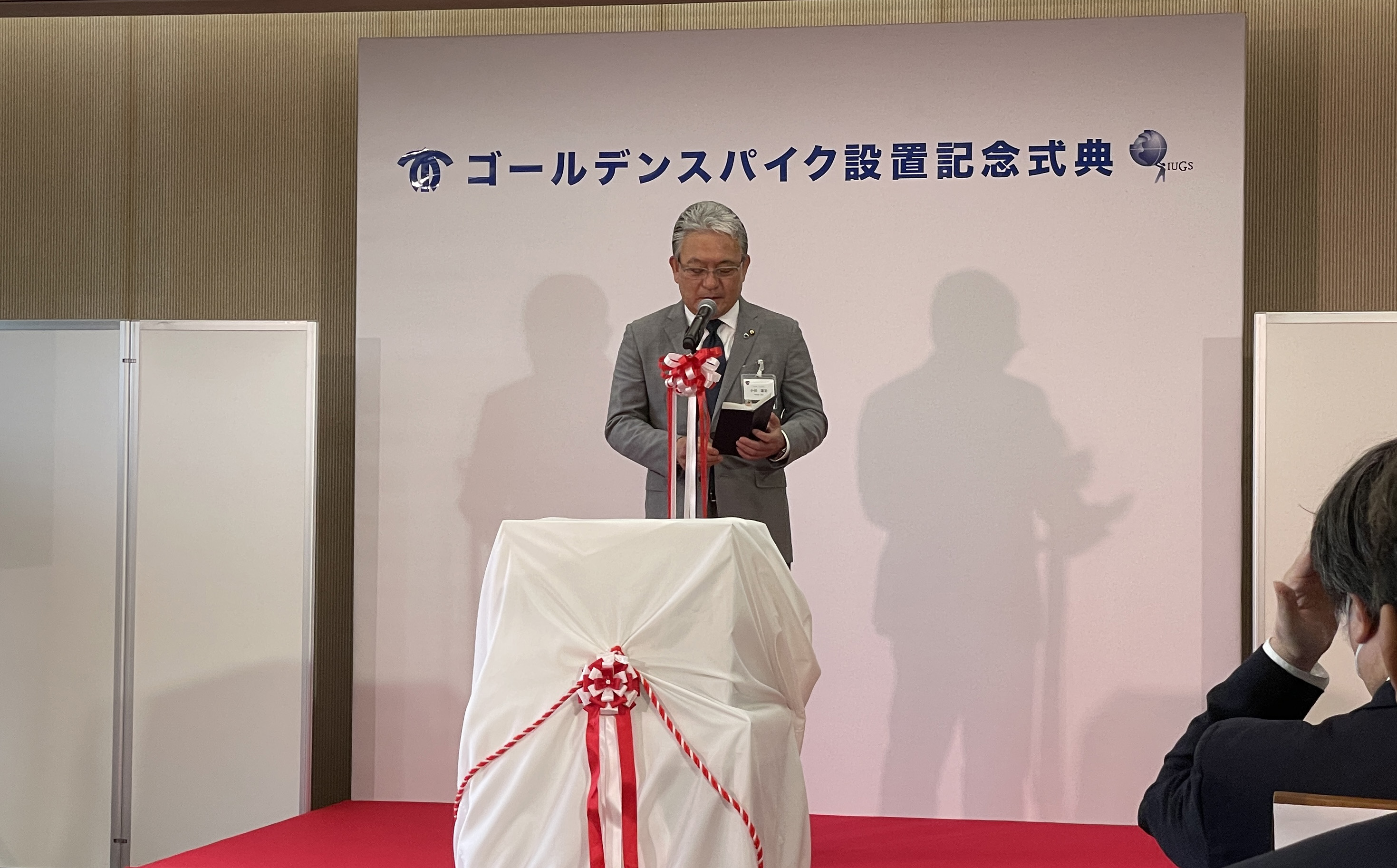 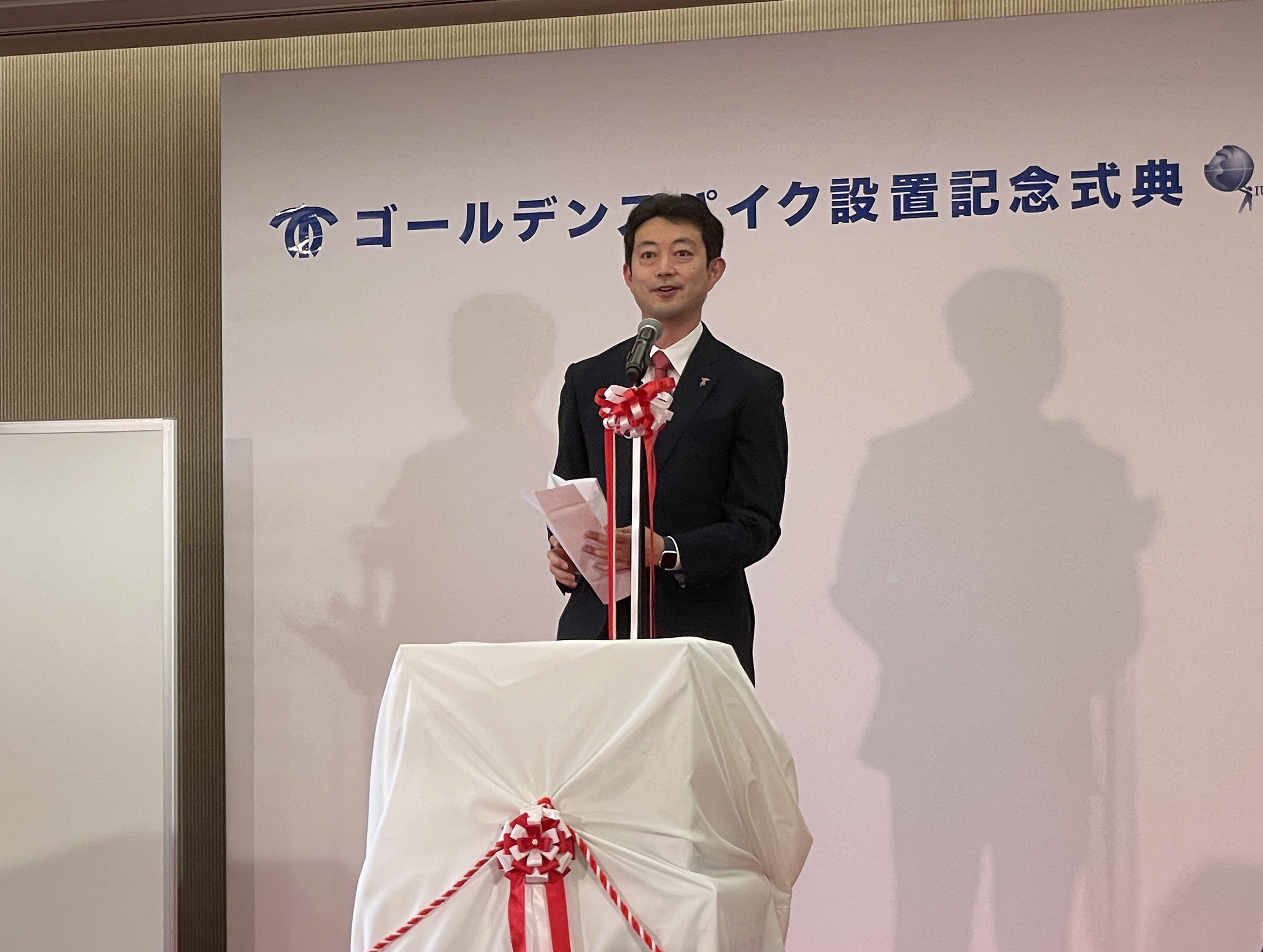 This was followed by presentations of Certificates of Appreciation to Golden Spike donors: Fuji Sash Co and Fuji Light Metal Co.

The event concluded with the unveiling of the ceremonial version of the GSSP “Golden Spike” plaque, an exact replica of the GSSP plaque affixed to the Chiba section. 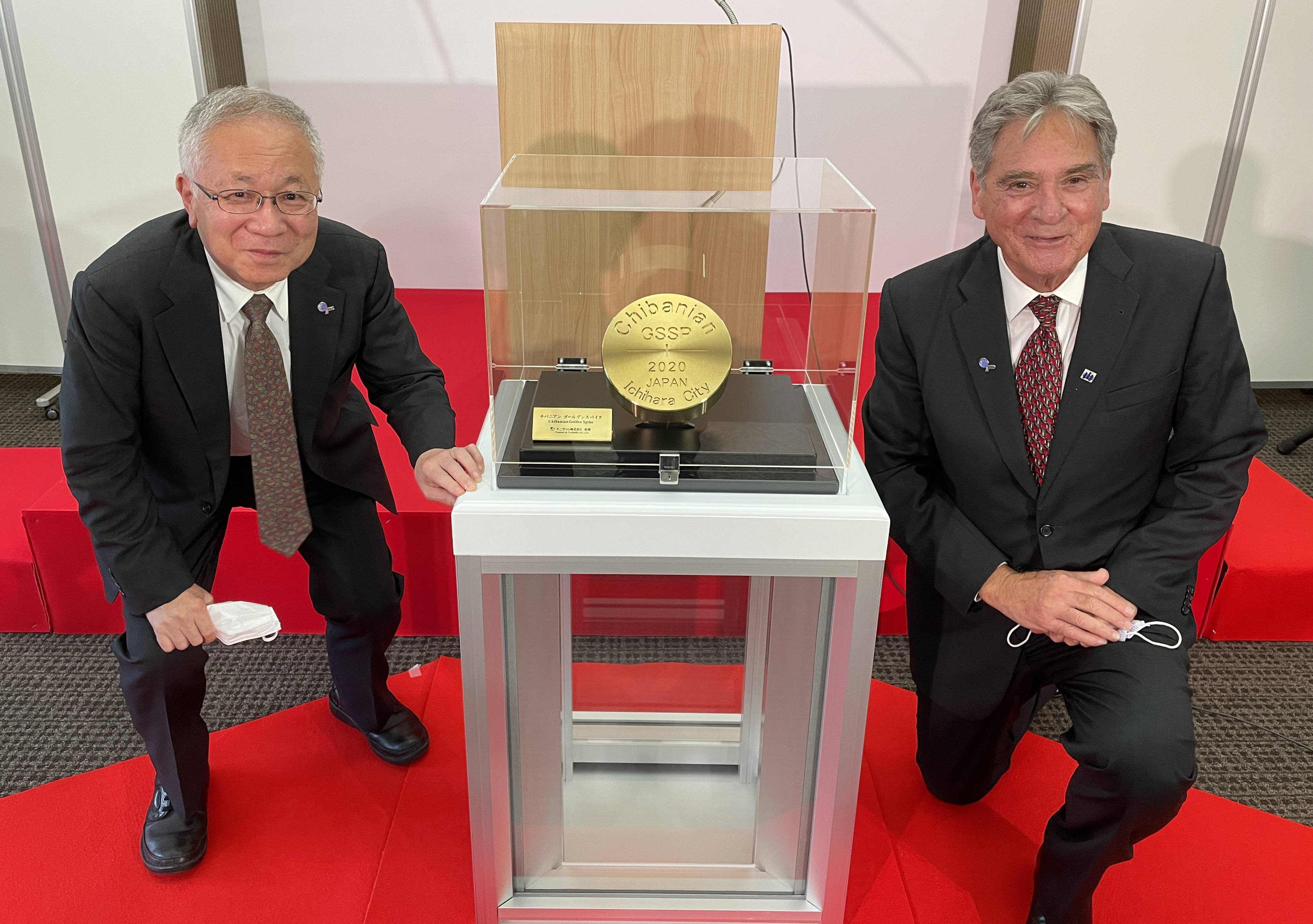 The Chiba dedication ceremony and field trip received intense media coverage owing to the enormous public interest in the Chiba GSSP, which is the first such geostandard to be designated in Japan. 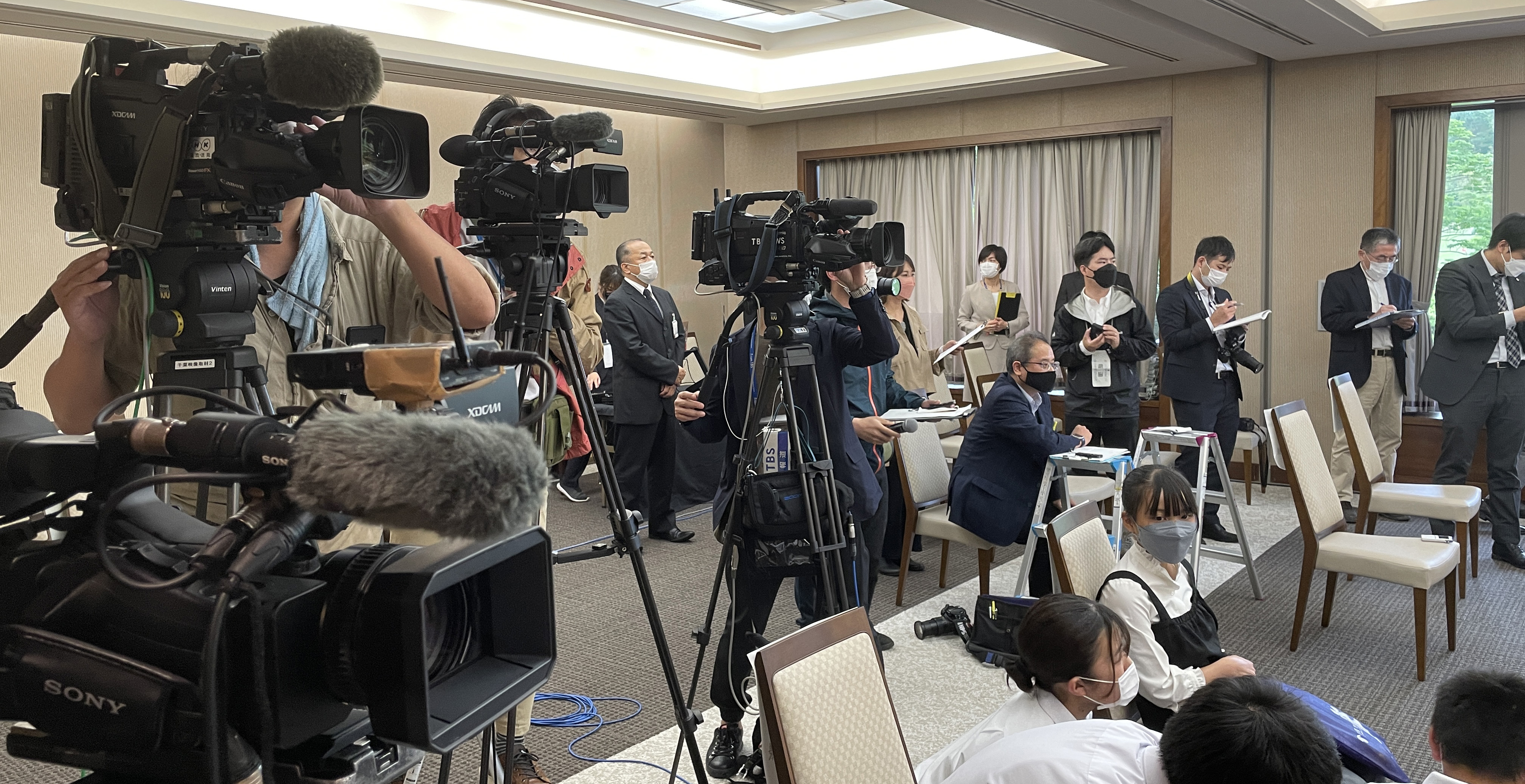 The Chiba GSSP and the dedication ceremony attracted widespread media coverage across Japan.

Following the ceremony, a field trip to the Chiba section itself allowed the delegates to see the installed GSSP plaque. The weather in May is unpredictable but the rain mostly held off during the visit to the outcrop. 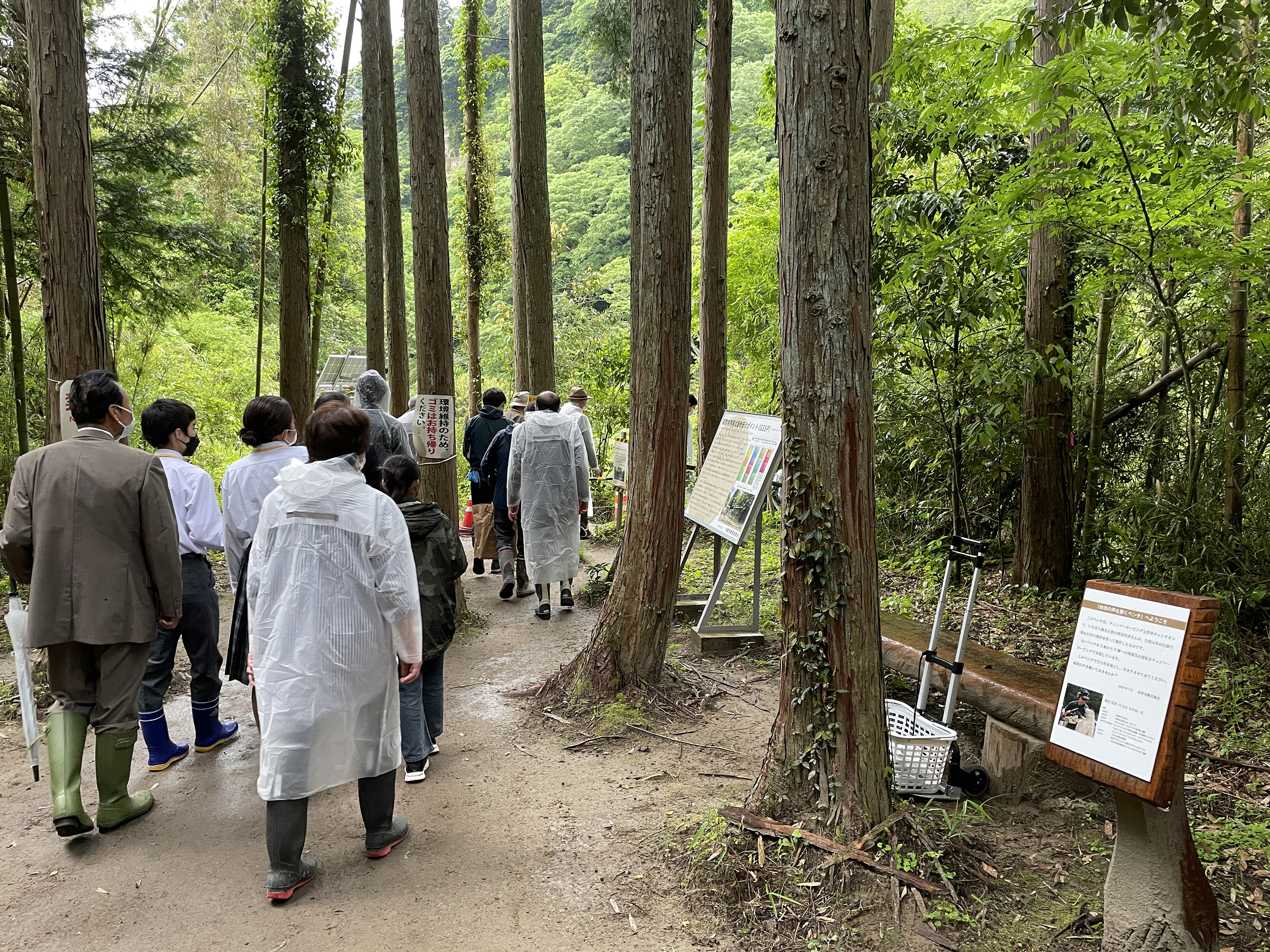 Approaching the Yoro River gorge with displays on the right explaining the significance of the GSSP and the Matuyama–Brunhes paleomagnetic reversal which serves as its primary guide.

On the right bank of the Yoro River, with the Chiba section offscreen to the left. 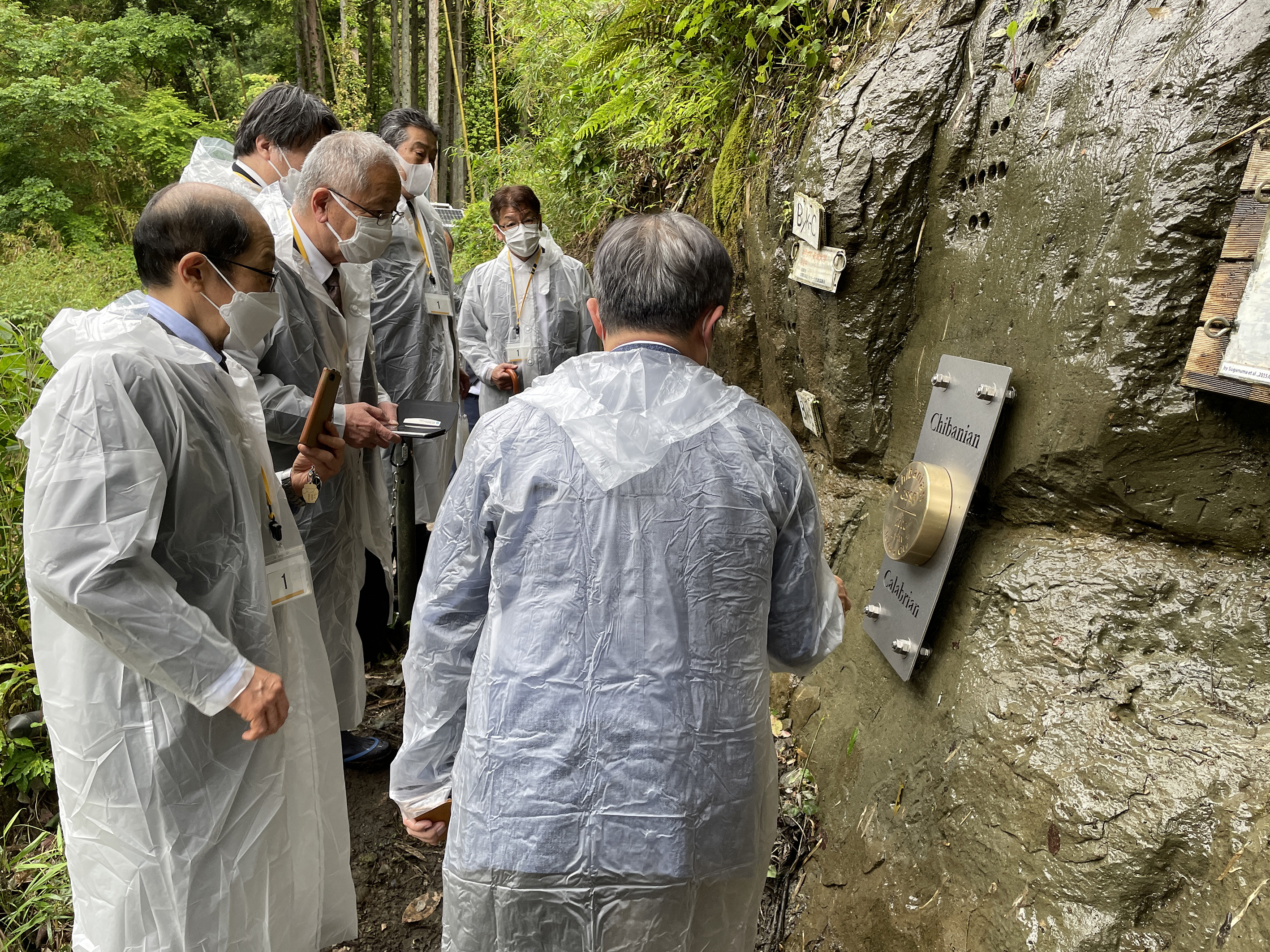 Prof. Okada (centre, with back facing), explaining the GSSP to Prof. Nishi (left), Prof. Kitazato, and other dignitaries. 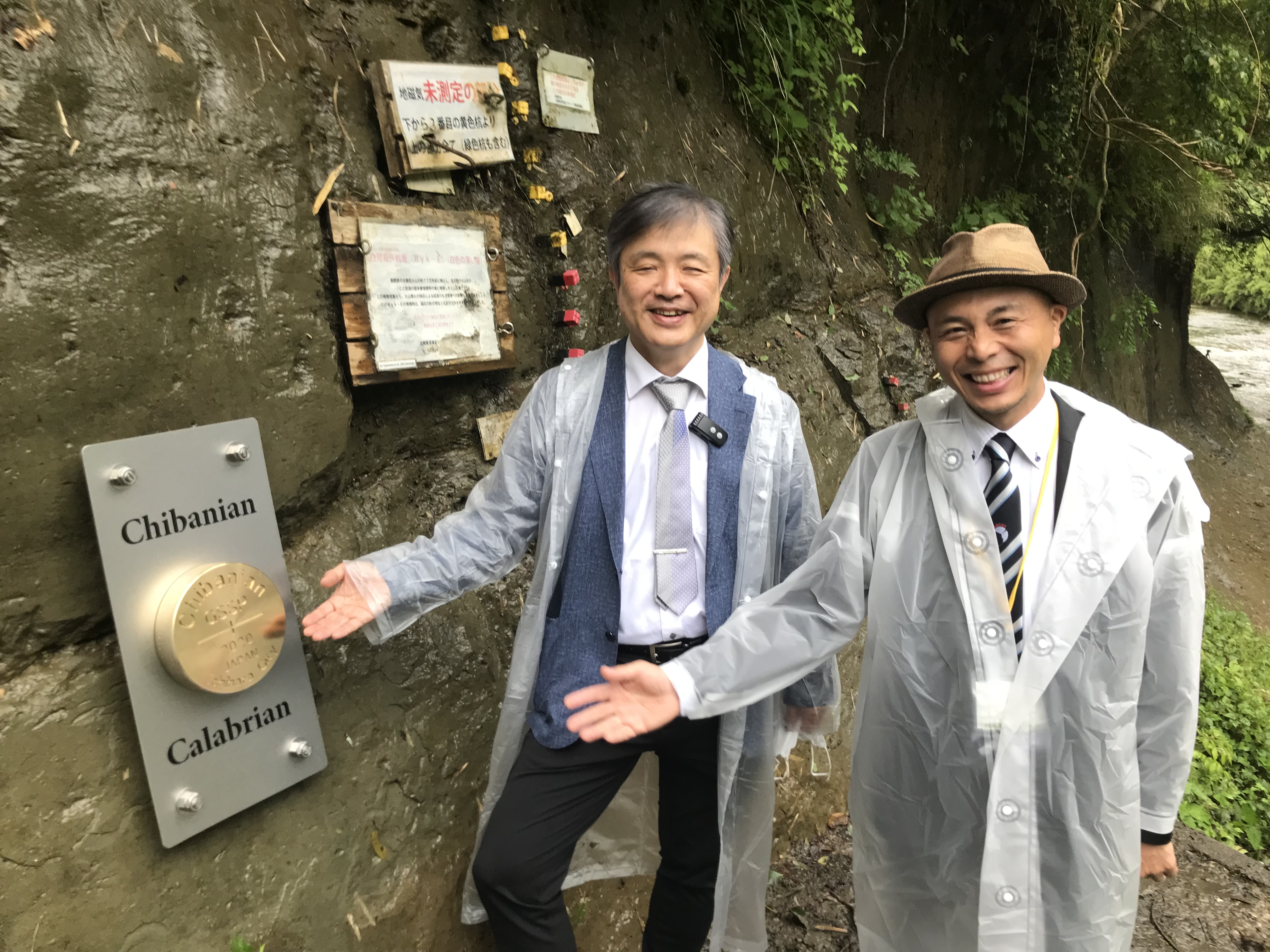 Assoc. Prof. Yusuke Suganuma (right) and Prof. Makoto Okada, the lead authors of the Chiba GSSP proposal at the GSSP plaque. The GSSP is located at the base of the Ontake-Byakube-E (Byk-E) tephra bed, a regional stratigraphic marker, and is 1.1 m below the directional midpoint of the Matuyama–Brunhes paleomagnetic reversal. The GSSP has an astronomical age of 774.1 ka (Suganuma et al., 2021).

A related one-day symposium entitled “The Chibanian: Its Academic Significance and Social Importance” was held on May 24. The symposium was organised by the Science Council of Japan, and held at its auditorium in central Tokyo in a hybrid format (on-site and online). The opening address was given by Prof. Takaaki Kajita (President of Science Council of Japan, and a 2015 Nobel laureate in Physics). 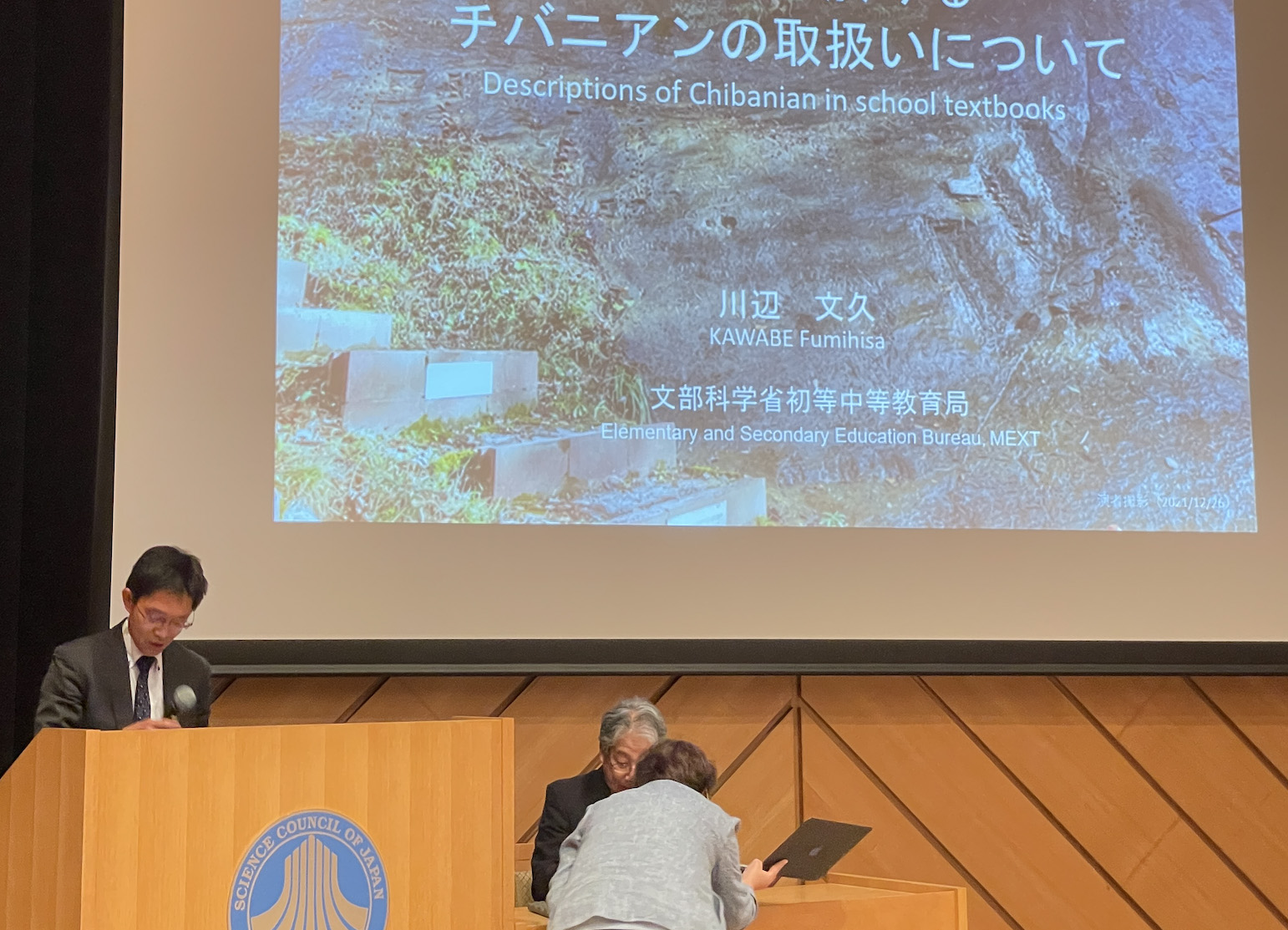 Fumihisa Kawabi discusses the significant impact of the Chibanian GSSP in elementary and secondary school education in Japan.

Among the numerous talks given, were those by Hiroshi Kitazato (“The Role of IUGS in the Approval of the Chibanian GSSP and its Significance for Geological Research in Japan”), Stanley Finney (“GSSPs – International Geostandards and Milestones in the History of the Planet Earth”), Martin J. Head (“Recent development of Quaternary Stratigraphy”), Makoto Okada (“Characteristics of Chibanian GSSP and its scientific significance”), Fumihisa Kawabi (“Descriptions of Chibanian in school textbooks”), and Joji Koide (“Academic research support from the standpoint of basic local government”). A publication summarizing the talks presented at this symposium is forthcoming. 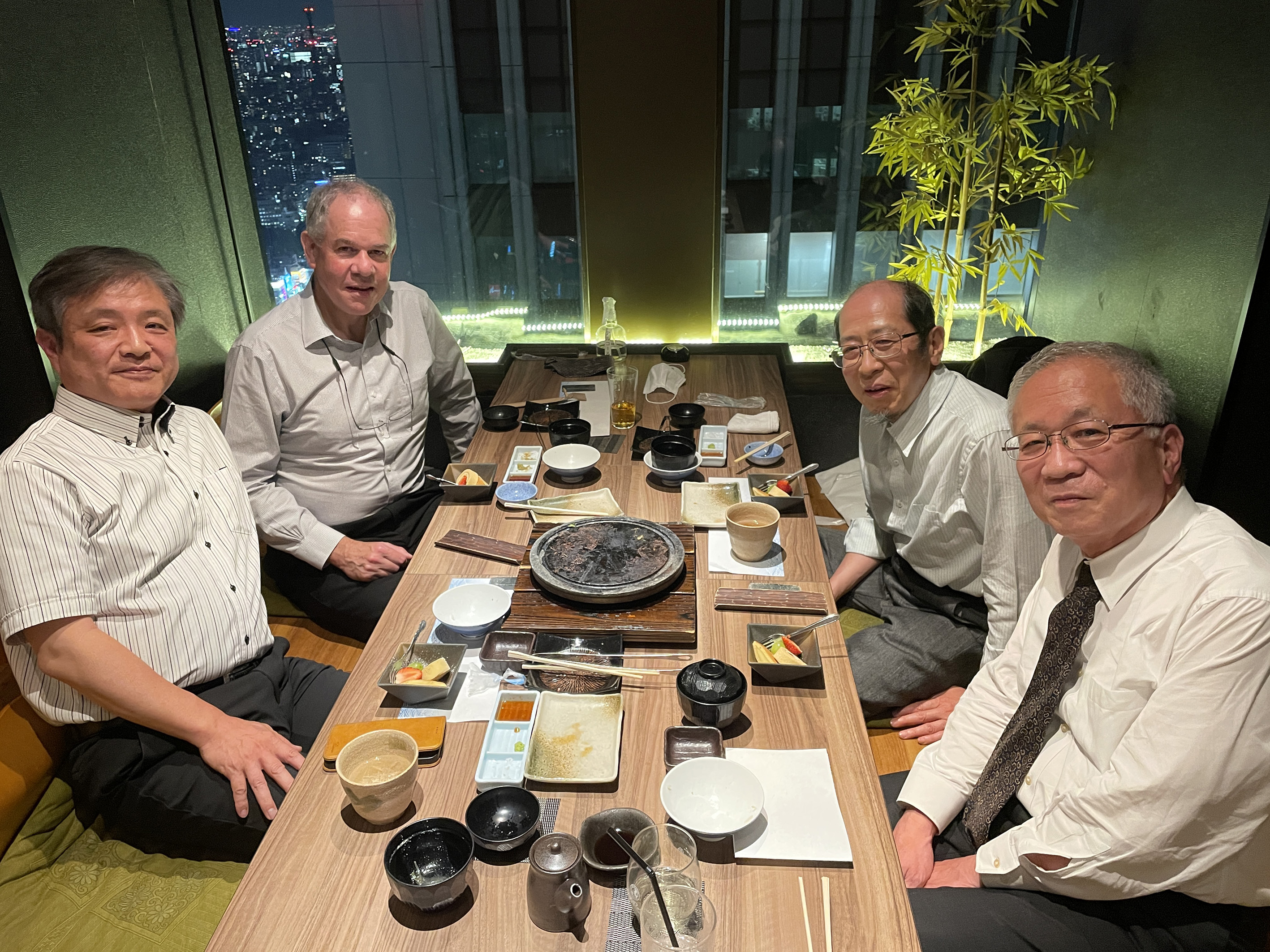 A dinner in Tokyo, near the top of a tall skyscraper, rounded off the activities of the day. Left to right: Profs. Makoto Okada, Martin Head, Hiroshi Nishi, and Hiroshi Kitazato.